Ed’s Note: It makes perfect sense to start White Men’s Week off with a black man who has spent his adult life trying to be white.

I finally realize why you are the world’s greatest musical icon. The logic came to me after I read about you selling out your final tour in four hours. In 240 minutes, you sold 750,000 tickets at a minimum of $105 a pop (the GA price). The simple math: at least $75 million made in four hours in the middle of a worldwide recession.

But it makes sense: You are the most genius crazy man the world has ever known.

What I’m trying to understand, though, is why you didn’t do this farewell concert tour four years ago in America. You made close to $200 million in a four-hour span off concert sales in England, a country with one-fifth of the population of the United States. Can you imagine what the receipts would have been on this side of the pond?

You could have kept The Beatles catalog and paid off Neverland Ranch. But I’m not writing this to belabor those points. I’m writing you to acknowledge your whacked-out genius.

I’ve come to the conclusion that you decided long ago to sacrifice some of your blackness with excuse. Yes, you’re still undeniably black. Mike, you were two hours late to your own press conference, your favorite food is KFC skinless chicken and you enjoy Crown Royal (see: Michael Jackson: The Magic and The Madness by J. Randy Taraborelli). But you blended your outer image to do the greatest good for the greatest number of people through your musical image.

Because I don’t want anyone thinking that I’m scheduling plastic surgery soon, I’m going to point out that I’m being facetious. Think about it, though. You’ve transformed yourself from an Afro-wearing, wide-nosed, dark-skinned black man into … the picture above on the far right. I’m not calling you white, but don’t you have a song titled “Black or White” where you transformed people’s faces in the video to prove a (valid and salient) point? It seems like what you’re doing with yourself.

Now that was genius. We should hope to live in a colorblind world, but we know we never will (see: The Lady & The Nutty Chimp). Maybe, that’s part of your transformation/genius. Who knows?

Thing is, your career was already off the ground before the surgeries. But it burst into a stratosphere unknown to most artists when you began chipping away at your nose and your “skin condition” started settling in.  Then you went Al Sharpton with your hair. Think about it: Off The Wall, Thriller and Bad. Your most successful era came after you started “experimenting” with plastic surgeons. 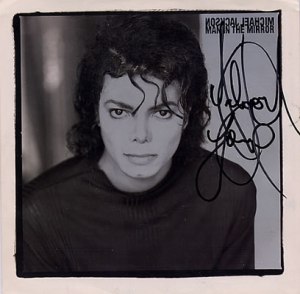 (Note: This letter doesn’t condone plastic surgery as a means to improve your image for monetary gain. Again, the love of money is the root of all evil.)

And because of what you’ve become — as well as your classic dance moves and Quincy Jones — your musical image has sustained itself for nearly 40 years. You continue to sell records — and 750,000 concert tickets in four hours.

No black man who accepts himself for who he is could ever do that. Need a list? James Brown, Ray Charles, Prince (a close second), Sammy D., R. Kelly, Kanye West, Jay-Z, etc. None of them could sell 750k in tickets in 48 hours.

Even white men come close, but fall short of the four-hour, 750k-ticket window: Bruce Springsteen, Elton John, Paul McCartney, Frank Sinatra, Eminem and Vanilla Ice. OK, Ice was a joke. But even he sold records because of a blended image. And he had as much talent as Milli Vanilli’s members … combined.

You see my point? There’s just cause behind people calling you Wacko Jacko, but also reasoning people see you as a genius. I wish you the best success with your one-location farewell tour (that makes no sense). And please, no pyrotechnics.

P.S. Please, sell one of these concerts to CBS, ABC or HBO so we can see it here in America. Hell, even PPV.
P.S.S. “Man in the Mirror” is your greatest/my favorite song of yours. The world is forever indebted to Siedah Garret and Glen Ballard for writing it.

This entry was posted in Our Glass Nation, Pop C. and tagged Kanye West, Michael Jackson. Bookmark the permalink.